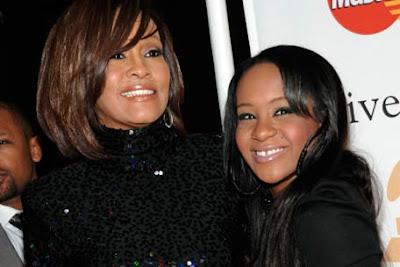 Whitney Houston‘s daughter, Bobbi Kristina Brown, has spoken out against her grandmother, Cissy Houston, for writing her tell-all book about Whitney.

Bobbi tweeted, “Anything concerning my grandmother’s book, I and @nickgordon of course personally have nothing to with … I haven’t read and won’t … I find it to be disrespectful to my mother and me being her daughter won’t tolerate it.”

The book reveals memories and details from Whitney’s life.

Earlier this week, Cissy Houston acknowledged in an interview with Oprah that her own relationship with granddaughter Bobbi was not the best.

“Is it true that Bobbi Kristina didn’t want you to write this book?” Oprah asked.

“That’s what I heard,” Cissy replied.

In another interview with TJMS, Cissy said she wanted Bobbi to read the book, but her attempts to get the book to her failed. “No, she hasn’t [read it] because I tried to send it to her, and I couldn’t get her,” she said. “You know. You know how 19 year olds are.”

Asked if she’s concerned about Bobbi, she responded, “Of course I’m concerned, she’s my granddaughter. And I love her very much.”

Ashanti – Rain On Me (Performance Version)